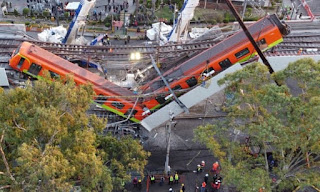 The death toll rose to 24 and 79 were hospitalized in Mexico City after a train collapsed onto a road in the city, according to authorities.

Officials said only five people were recognized amongst the dead.

The accident occurred at around 10 p.m. when a train in the Linea 12 overpass collapsed.

A train car fell directly into traffic. More than 100 ambulances arrived at the scene with The National Guard, army and the navy rushing to the injured.

Mexico City head of government Claudia Sheinbaum said investigations are currently underway with the Attorney’s General Office probing and the newly-hired Norwegian DNV GL will conduct an external audit to discover the cause of the collapse.

Sheinbaum said investigations would go “until its last consequences,” and that the metro line will remain closed indefinitely.

She said that the government has allocated 490 buses to deal with the mobilization during the structural revision.

Metro Director Florencia Serrania said in previous revisions made to Linea 12, there were no findings of structural flaws or deflections.

She said in 2020, there were no anomalies found and calibration and revisions of the route are made daily.

“From that [investigation], the responsibility will be established. We cannot fall into the terrain of speculation, much less blaming the possible perpetrators without proof,” he said at a news conference.

The Golden Line, as it is popularly called, was inaugurated in 2012, when Foreign Minister Marcelo Ebrard was the head of the city.

He said if someone has not done anything wrong, that person should not be worried.

“But I am subject, like everyone else, but more as a high official and as the one who promoted the construction of the line, I am subject to what the authorities determine,” said Ebrard.